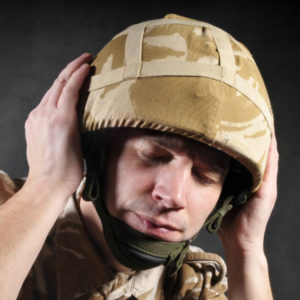 Members of the U.S. military dedicate their lives to serving our country. What do they get in return? If they used earplugs made by 3M, they may have been given hearing damage. An American company may have injured countless service members by knowingly selling defective products to the United States military.

Recent lawsuits allege that 3M, the maker of a particular set of earplugs, knew that their product was defective. However, they continued to sell the product to the government, leaving service members with hearing problems and, in some cases, permanent hearing loss. At Ryan Bisher Ryan & Simons, we believe 3M should be held accountable for their actions by compensating military members for their injuries.

If you believe defective 3M earplugs may have impacted your hearing during your military service, contact the 3M earplug lawsuit attorneys at Ryan Bisher Ryan & Simons today. We can confidentially discuss your situation to determine whether you have a valid case against the manufacturer. The first consultation is free. Contact us today to learn about your rights to compensation.

Why Was 3M Sued Over Earplugs?

3M is an American-based company that produces tens of thousands of products used in households and businesses worldwide. The Maplewood, Minnesota-based company began as a mining venture back in 1902. While the mining aspect of the business was a failure, it did start to see success in other areas, such as innovation and new technologies. Today they produce over 60,000 different products under familiar brand names. From adhesives, laminates, protective films, medical products, and electronic circuits, 3M has its hands in just about everything.

However, not all of the products from their medical division may be safe for use. This is evidenced by the fact that numerous military veterans are now suing the company, claiming that defective earplugs made by the company and sold to the U.S. military caused irreparable harm to their health. While 3M denies they knew that the earplugs were defective, at least one court has already sided with three military veterans and said that the company is liable for their injuries.

Why Do the Earplugs Allegedly Cause Harm?

Lawsuits allege that Aearo Technologies Inc. and then 3M knew that the stem of the earplug was too short. This caused the earplugs to fit incorrectly and loosen over time. Ill-fitting earplugs cannot effectively block out noise as they are intended to do. When this happens, the ear can be seriously damaged by loud noises, such as those present in training exercises and the battlefield.

What Are the Health Risks of Using Defective Earplugs?

There is a reason your parents told you to turn your music down. Loud noises are particularly damaging to the human ear, especially the inner ear, known as the cochlea. The outer ear funnels noise or sound waves into the ear canal and then to the eardrum. Then, the eardrum vibrates and sends those vibrations to the three tiniest bones in the human body, which amplify the sound vibrations and send them to the inner ear.

The inner ear is filled with fluid and thousands of hair cells. The sound vibrations create waves or ripples in the fluid, and the tiny hair cells bend with those waves. The hair cells detect sound and send electrical signals to the brain, which then interprets those sounds.

Extremely loud noise can overwork and then damage those tiny hair cells. Eventually, those cells will begin to die, and that is when hearing loss can take place. Extremely loud or persistently loud noises can also damage the auditory nerve, the main nerve that sends the electrical signals to the brain.

Over time, loud noise can cause the following health concerns:

How Can I File a 3M Earplug Lawsuit?

If you are interested in filing a lawsuit against the markers of the CAEv2 earplugs, your best course of action is to contact an experienced 3M earplug lawsuit lawyer for help. Defective product claims can be complex and challenging. A wealth of information and evidence needs to be collected to build a solid and compelling case.

The first step in the process is establishing whether you have a claim against 3M. If you are a current or former U.S. military member and have hearing impairment issues after using the defective CAEv2 earplugs, you may have a case. You will need medical documentation to establish that you have a hearing impairment or hearing loss. This information will need to coincide with the time frame that the military was using the 3M earplugs.

An attorney can help you gather the necessary medical documentation to link your hearing condition to the use of the 3M earplugs and help show negligence on the company’s part. A previous whistleblower complaint lawsuit brought by a 3M competitor may also help provide some legal precedent for proving this negligence.

How Can a 3M Earplug Lawsuit Attorney Help Me?

An experienced 3M earplug lawsuit attorney is out for justice. When a company knowingly puts U.S. consumers in harm’s way and values profit over people, they deserve to be held accountable for their actions. It is especially heart-wrenching that a U.S. company would allegedly put profit over the health and safety of military service members who put their lives on the line to protect others.

A military lawsuit lawyer can also work towards getting injured service members financial compensation for their injuries. Money can’t undo the damage to your hearing, but it can help pay an individual’s medical expenses and compensate them for their emotional distress and pain and suffering.

While this financial compensation addresses the damage done to the individual filing the lawsuit, it may also serve another purpose: showing this company that putting lives at risk is not worth the cost of doing business. The financial payout can sometimes serve as a deterrent so that companies avoid this type of practice in the future.

To accomplish these goals, an attorney will work to understand the specifics of your defective earplugs case. Then they can begin gathering evidence, medical documentation, witness statements, and expert testimony to support your claim against 3M. It takes an experienced attorney to compile this information into a convincing case that offers you the best possible chance at a favorable outcome.

While the process can seem both daunting and challenging, U.S. service members are not known for backing down, and neither will we. At Ryan Bisher Ryan & Simons, our dedicated 3M earplug lawsuit attorneys will fight to protect your rights and work hard to recover the financial compensation you deserve.

3M’s CAEv2 earplugs were standard issue between 2003 and 2015. If you served during that time period, don’t wait to learn whether you can receive compensation for your injuries. Call or contact us today for a free consultation with a skilled Oklahoma 3M military lawsuit lawyer.